“All the performances are good, though Mark Le Brocq has a particularly fine time playing a child-eating lion as a cat-suited rock god.”

Figaro gets a divorce Magdeburg Opera

“among the guests the men shone: The Major, Mark Le Brocq, dazzled as a high gleaming tenor, so unbelievably vicious and brilliantly disgusting throughout his role that one could not but find him wonderful. A dark descendant of Benjamin Britten’s operatic world”

“The central quartet shine….Mark Le Brocq’s Mao is one of his best roles to date, making a strong dramatic impact” Sunday Times

“As Mao, Mark le Brocq masterfully conveyed a sense both of charisma and folly” Observer

“The most satisfying figure, in part because his frequent presence gives us a chance to know him, in part because Mark Le Brocq portrayed him outstandingly, is that of Pierre Bezukhov, rich, socially awkward; a man without purpose yet idealistic, sensitive and questing”  The Observer

“Pierre’s pivotal journey is depicted with a psychological fervour that commands the drama and gives the excellent Mark Le Brocq a role to savour. The imposing tenor gives a terrific performance” What’s onstage

“His rich tenor voice cuts venomously through the icy orchestral washes of the opera’s electrifying start.” The Scotsman

“Among the cast, Mark Le Brocq’s foppish, sardonic Loge and Mark Stone’s vocally authoritative Alberich stand out, managing to create stage personalities to match the strength of their musical ones” The Guardian

” The standouts are Mark Le Brocq, vocally and visually on top form as a dandyish Loge”  The Stage

“Negus’s cast mostly copes admirably with the challenge. The unquestionable star of the show is Mark Le Brocq’s Loge, a kind of fin de siècle Mephistopheles, with frock coat and cane, pirouetting round the stage in a way that openly ridicules the stolid, bewildered, humourless bourgeoisie of mount Valhalla, and even runs rings (non-golden) round the crafty tenants of Nibelheim. He also sings – the most lyrical music in the opera – with elegance and eloquence.”   Artsdesk

“…several outstanding performances. Chief amongst these was Mark Le Brocq’s dodgy dealer Loge, whose crimson frockcoat and twirling cane brought a whiff of a Victorian music hall MC. His ease of movement and vocal projection were outstanding, his perfectly caught ambivalence tailor-made for this role.”   Operatoday

” But every singer here pushes themselves to the utmost in portrayals of great force, notably  Mark Le Brocq’s Luka Kuzmich.”  The Guardian

” Stand-out performances among the principals came from Luka (Mark Le Brocq) and the Commandant (Robert Hayward). In the first scene, Le Brocq sang the tale of Luka’s prior flogging with immense intensity, his big, rounded voice and strong acting taking complete control of the stage.” Bachtrack

” Le Brocq’s tenor was a formidable force against the abrupt and angular instrumental lines.”               Opera today

” Mark Le Brocq is excellent as the weaselly Golitsyn”  The Times

” ….a terrific opera row between three of Mussorgsky’s main characters….praising the sustained intensity of the performance of these three singers” Arts Desk

“ The singing performance of the ensemble is magnificent, especially the American Lester Lynch as Faust, and the Englishman Mark Le Brocq as an extremely agile Mephisto, who drives the event like Loge in Wagner’s “Ring”.”

“ Mark Le Brocq is an eloquent Mephistopheles with rather baritonal timbre who neverthless reaches the tenorial heights without any trouble.”

“Equally dazzling were Mark Le Brocq’s scenes as an exceedingly lively Mephistopheles….his extremely versatile and powerful tenor seemed to have been created for this part.”

“Mark Le Brocq, as his devilish Alter Ego Mephistopheles, was his vocal equal in this often diabolically high-lying part. Wit, charm and allure were mastered by Le Brocq’s brilliant tenor.”

“ the dramatic skill and vocal tirelessness of Mark Le Brocq’s excellent performance in the role……  Le Brocq and Lynch led a fine cast….”

“The principal singers gave their all. Mark Le Brocq (Siegmund) and Lee Bisset (Siegelinde) transmitted white-hot passion both in their incestuous love for each other and in their defiance of the gods”  Nottingham Post

” Credited simply as Narrator, Le Brocq deserved to have had all the roles he portrayed listed individually: he characterised each one – over 20 in all – with much care. Words were crystal-clear, he realised an extraordinary diversity of accents and voices, male, female, young and old, in a rich variety of colours. Apart from anything else it was a feat of endurance” Opera

Biedermann and the Arsonists  Independent Opera

” Mark Le Brocq perfectly captures the ineffectual Biedermann and, remarkably, never tires in vocal writing which continues to ascend as the character loses his grip on reality”  The Stage

” Mark Le Brocq as the Steersman, fresh and youthful of timbre, was delightful in his Act 1 Sailor’s song” Opera Britannia

“Aron was taken on the first night by an understudy, Mark Le Brocq, and quite brilliantly. It is not as though his lyric tenor utterances dilute his brother’s austere visionary message with a dose of Puccini – this is still tough music on the ear – but Le Brocq conveyed them with astounding assurance.” The Sunday Times

“Mark Le Brocq jumped in at the last minute to save the day, singing heroically and brilliantly realising the character as a track-suited, greasy haired but wily and charismatic speaker.” The Spectator

“The suave, plausible Aron was Mark Le Brocq, whose performance had so much assurance and authority it was hard to believe that he is the understudy, and had only known he was appearing a few hours earlier.” The Guardian

“The man with the most unenviable task on the opening night was Mark Le Brocq stepping in at just a few hours’ notice for the indisposed Rainer Trost. He conveyed with ease Aron’s streetwise trainer-clad demeanour, projecting the elaborate arioso lines as if he had been doing so all his life.” Opera Now

” Mark Le Brocq, whose ease and fluent beauty in the opera’s most demanding role made it hard to credit that he was standing in as an understudy given just a few hours notice. Both Le Brocq and the house’s management are to be congratulated” TLS

“Aron was not the advertised Rainer Trost, who was indisposed, but the sensational tenor Mark Le Brocq, who stood in at short notice on minimal rehearsal, but who gave a performance that was just as gripping as Tomlinson’s, with a vocal line that, by contrast with Moses’ stammering Sprechstimme, sounded almost like bel canto.” Bachtrack

“Hardly less impressive is Mark Le Brocq‘s smooth talking, shallow thinking Aron, taken over at the last minute from an indisposed Rainer Trost, but sung with an assurance that belies the extreme difficulty of music whose lyricism is constantly moulded to a fixed and somewhat angular sequencing of notes. Le Brocq, though understudying the role, had I gather never sung it with the orchestra or on stage. You could hardly have known. ” Artsdesk

“Aron is an immensely challenging role, both vocally and dramatically, and no small test of memory, but Le Brocq stepped up to the plate magnificently – nothing about his performance suggested a last-minute stand-in. Impressive.” musicalamerica.com

Fall of the House of Usher  Welsh National Opera

“..the singing of Mark Le Brocq is excellent”  The Daily Telegraph

“Strong performances bring many characters in from the mist, especially so in the case of Mark Le Brocq’s playful but strongly sung Loge”   The Times

” Things liven up sharply with the entry of Mark Le Brocq’s vibrantly physical Loge in the second scene. Le Brocq, as well as being a fine lyrical singer, is another performer who understands the virtues of facial expression and quick, reactive gesture.” Artsdesk

“The clear, bright-tone of tenor Mark Le Brocq is deployed to good effect as Vitek, the head clerk. It’s a convincing characterisation and Le Brocq’s diction is excellent”  Opera Britannia

“…a formidable tenor….” The Times

From the House of the Dead Opera North

“Mark Le Brocq, equally clear with his text, is tremendous as Paris…a wonderful lyric top to his voice ” Evening Standard

“All the performances are good, though Mark Le Brocq has a particularly fine time playing a child-eating lion as a cat-suited rock god.” The Guardian

“Certain performers in particular stood out. Mark Le Brocq as Ulysses and Marie Lenormand as Penelope not only sang beautifully but showed the appropriate mix of intimacy and bewilderment in the culminating reunion scene.” Chicago Theatre Reviews

“….his tone was bright, his performance committed and his words well projected” Opera

“The lighter elements are stylishly handled: the excellent Mark Le Brocq and the convincingly boyish Catherine Hopper make much of the comic interludes for Huntsman and Kitchen Boy.” Whatsonstage

“Tenor Mark Le Brocq (Agenore) was the only singer to do full justice to Mozart. He is clearly accomplished and also very expressive. The other four singers were not quite in Le Brocq’s class.” Musicomh.com

“The most mature performance came from the experienced Mark Le Brocq as the nobleman Agenore; his track record showed in his sensitive phrasing, concern for the (Italian) words and reassuring demeanour.” The Financial Times

“Tenor Mark Le Brocq was openhearted and appealing as the parish priest and St John. Riding herd on the rehearsal, trying to comfort the grieving parents, he was a man completely enmeshed in the lives around him. Le Brocq has a relaxed, warm tenor that was comfortable in Handel’s serene, lyrical melodies as well as the oratorio’s lavish, virtuoso decorations.” Chicago Sun-Times

“The best all round performance, vocally and stylistically speaking, comes from Mark Le Brocq as the gardener Binet, because he really plays with the words, doesn’t just sing but acts vocally….he lights up all the scenes he is in…” Operetta Research Centre Amsterdam 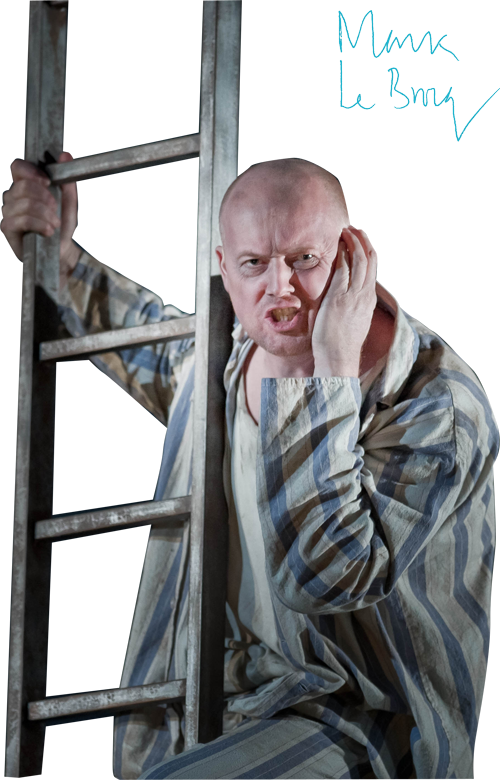